Use of Disruptive Technologies set to revolutionise home delivery with faster availability of food at home or office – FICCI PwC Food Service Retail Industry Report Credits to the changing consumer behaviour, Food Service Industry is at the cusp of massive growth 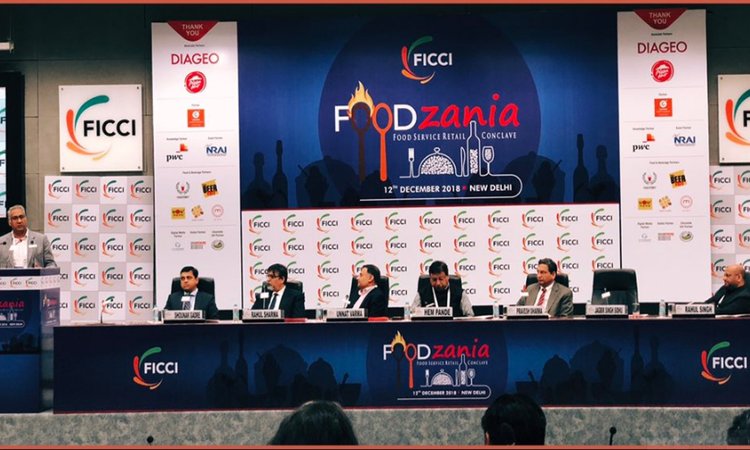 New Delhi, 12 December 2018: Industry leaders of the Indian Food Service Retail sector today highlighted the upcoming golden decade of the growth in the industry driven by the changing consumer behaviours and influx of technologies within the business.

Speaking at FICCI’s Foodzania 2018 – The Food Service Retail Conference on the theme of ‘Changing Landscape of the Food Service Retail Industry’ here today, Mr Unnat Varma, Chairman – FICCI Task Force on Food Service Retail and MD – Pizza Hut India Sub Continent said that the Indian food service industry is at the cusp of a massive growth. He further added that the changing landscape of the food service retail industry is largely driven by the changing consumer behaviour which can lead the sector for a sustained double digit growth over a decade. “There is a huge consumer market, changing consumer habits, increase in disposable income, and as the industry has evolved, it has become bigger and better,” said Mr Varma.

Mr Jagbir Singh Sidhu, Chief Operating Officer (North), Diageo India said that the food services industry contributes significantly to the economy by creating millions of jobs. “With the advent of newer technology, the industry has seen a paradigm shift with consumers opting for ‘dining out’ experiences, making it an important partner for the beverage alcohol sector,” he added.

During the event, ‘FICCI – PwC report on ‘Changing Landscape of the Food Service Retail Industry’ was also released.

Mr Rahul Singh, President – NRAI and Founder & CEO – The Beer Café highlighted the significant role of food aggregators in increasing the consumption of outside food. He said that they are the creators of behavioral change among consumers that is going to increase propensity of dining out. “Next 10 years are going to be the golden decade from the perspective of consumption,” he added.

As per PwC, the overall food industry has grown by 10 per cent. Organized and unorganized players together are valued at INR 4.50 thousand crores, 25 – 30 percent of which is contributed by organized segment. Mr Varma added that true transformations are happening with use of technology; expectation from food eco-system is changing and food that is at heart of all services is being outsourced thus paving a way for double digit growth.